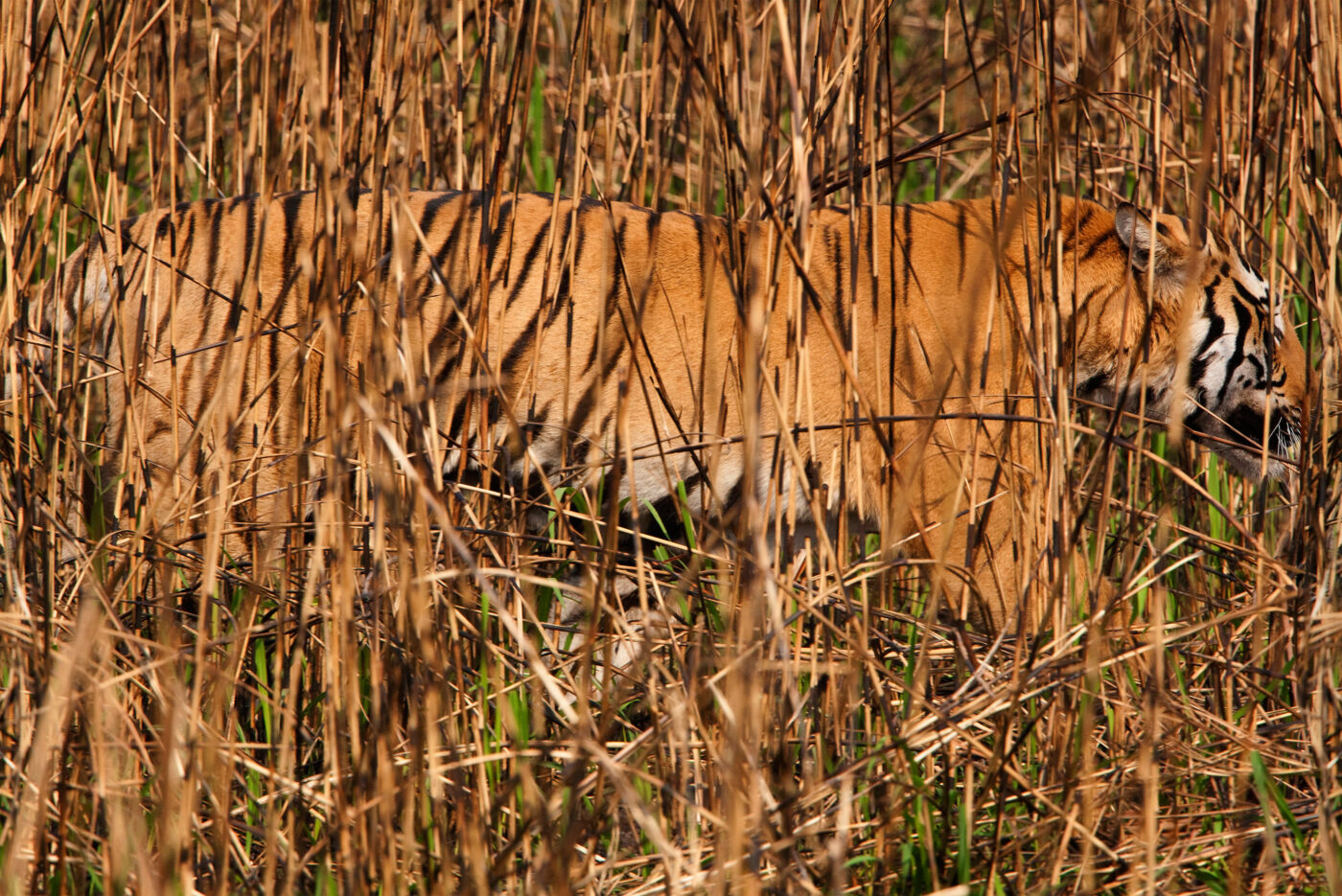 “This photo was taken on assignment for National Geographic in the Kaziranga National Park in Assam, northeastern India. It was the most dangerous place I have ever worked in my life because I was on the ground with tigers moving freely about in grasses up to ten meters high.

One day, I was riding on an elephant with an anti-poaching patrol when a rhino attacked us. The rhino bit the elephant’s trunk and chased us for 500 meters. I had a bamboo pole with a camera attached to it and was trying to get a picture of the rhino jumping up at the guard to attack him. Seeing a 5,000-pound animal jumping up to attack someone on the back of an elephant was absolutely incredible. I ended up flying off the top of the elephant, but my fingertips just managed to grab hold of the seat—or I would have been a dead man.

I saw this tiger lying in the road. For the next two hours, it attempted to go into an elephant herd to grab a baby elephant. The matriarch of the herd charged him every time he attacked and, after two hours, he finally got tired and walked off through the burnt grass. This photo, where he exactly fills the frame, was the last one I shot before he disappeared.

It shows the majesty of the tiger and how incredible our natural world is. The burnt grass comes from lightning and fire, and this is why the tiger has its stripes. Tigers evolved to look like this so the deer that they hunt will not see them. Because of that camouflage, the tiger became the king of the jungle.”

Steve Winter was steeped in photography almost from birth. At the age of seven, his father, who was a member of the local camera club in Fort Wayne, Indiana, gave him an Instamatic camera. Soon, father and son were winning prizes in the annual Kodak snapshot contest. But it was seeing the work of the great photojournalists of National Geographic and LIFE magazines that made him dream of being a photographer. Today, Steve is one of the best known wildlife photographers in the world, whose photos, like “Hollywood Cougar,” have become some of the most iconic images of our time.

You specialize in wildlife photography. What attracts you to that? And how do you think photography can make a difference?

Photography can be a powerful tool. One of the most important things is to show people the natural world in a completely new way. Tigers are the number one animals in the world. But how do you connect that animal, and the landscapes in which it lives, to our daily lives? The forests are the lungs of the world, providing 50 percent of the oxygen we breathe and 75 percent of all fresh water. If you save jaguars in the Amazon, lions and leopards in Africa, or tigers in South Asia, you’re helping us save ourselves.

You are currently working on a worldwide leopard story for National Geographic. Tell us about the project—and how it can help save leopards.

Like my photo “Hollywood Cougar,” I am trying to find images that people haven’t seen before, which give them a reason to care not only about these animals but also about the ecosystems in which they live—and then transfer it back to their own lives.

There are almost 60 leopards living in Mumbai, the fourth largest city in the world. Instead of the clichéd image of a leopard lying in a tree, if we can show people something jaw-dropping—like a leopard walking at night 50 meters from an apartment block in Mumbai—people will stop and look at leopards in a new way.