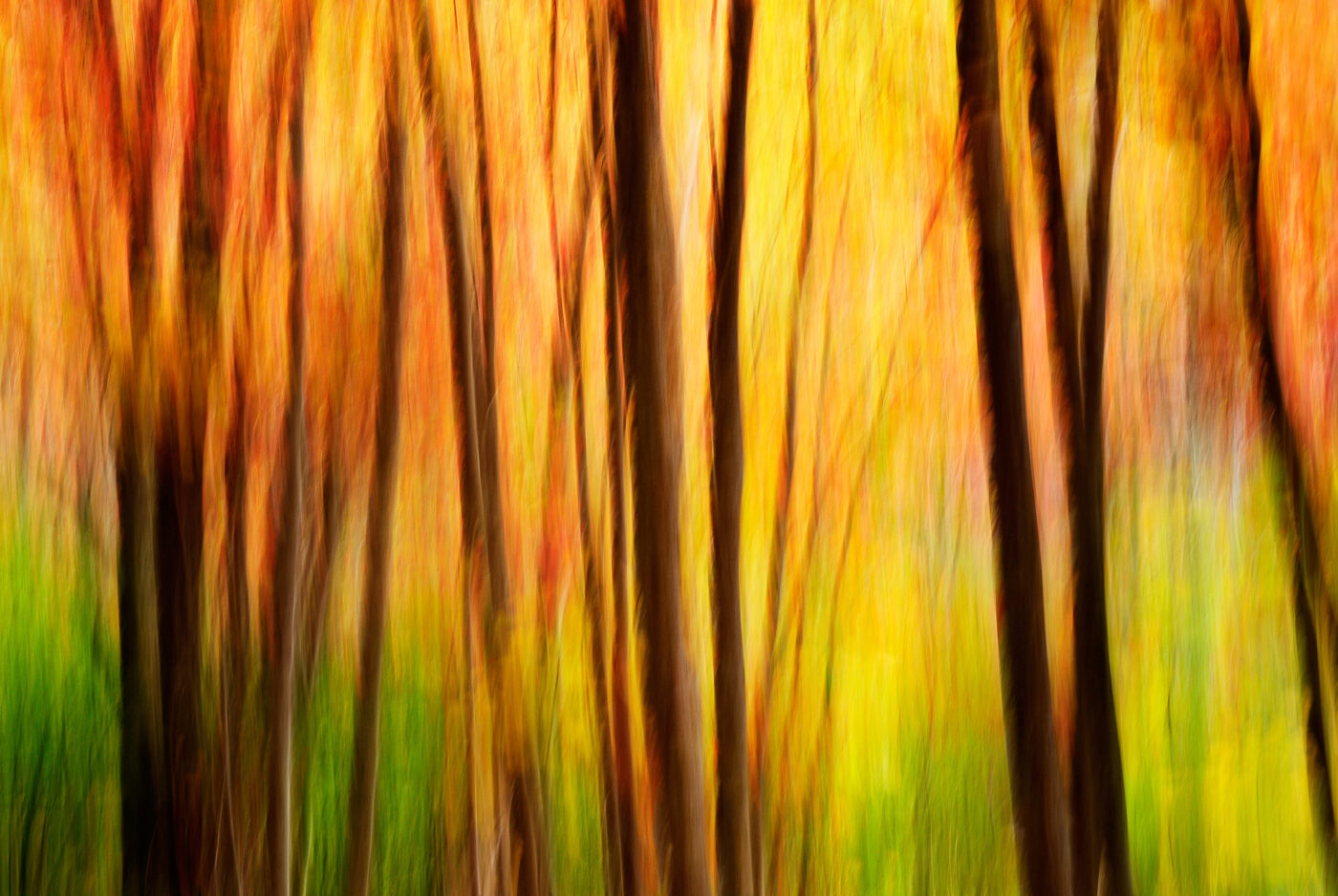 Tell us the story behind the image of the maples.

I took this photo in the autumn in Acadia National Park, in a thick forest near a river. These are maple trees. The reason I took it is because I have seen a zillion pictures of fall foliage. I wanted to create something different, something impressionistic, like a painting, rather than the usual picture with red leaves that we have seen a million times. The way I see it, I have a canvas in front of me – I just take a paintbrush and paint.

In order to make fall pictures in Acadia you have to go on a precise week in October. The date changes every year because of the weather, so you need to monitor the situation before going. That particular season, a hurricane had passed through and very few leaves were left on the trees. But in that particular grove…autumn was in full swing.

What do you want the viewer to feel when they look at these photos?

I want them to discover the beauty in nature that is not obvious. I run away from obvious pictures; postcard pictures. Anybody can shoot that nowadays with an IPhone. Creating is very different and that’s what I do. I play a lot with movement and with the panoramas, to capture that eternity of the moment in a panel. It’s really difficult because you’re counting on some event to happen while you’re shooting these massive pictures. Often, I use light to create an image, rather than just snapping a picture, which is easy to do. If you look at the white and green image of the aspens, you can walk into that forest in your imagination – and get lost in there.

It’s unusual for world-class photographers to begin their careers late in life. But Cuban-born Raul Touzon was already in his 40’s, with a steady job at Kodak, a wife and two children, when he took a deep breath and leapt off the high board to follow his passion. Since then, he has been making up for lost time. His aim is to capture what he calls “The Eternity Of The Moment” and his photographs have been featured in numerous magazines, including Time and National Geographic. In recent years, he has developed a unique, impressionistic style, pioneering the production of large scale, multi-frame landscape panoramas.

Speaking from his home in Miami, he talks about his Latin roots and the precarious life of an artist; how he thinks of the camera as a painter’s brush; and why he hates picture postcard images of Nature.

You have said that what you seek in your photography is "The Eternity Of The Moment." Tell us what you mean by that.

I practice two or three different disciplines with photography: documentary, underwater and natural history. I all those cases I am presented with moments that are unique and will never ever repeat themselves. You will never see that storm on the horizon with the beautiful lightning again; or the little kid you found during an Easter procession in Antigua, Guatemala. Those moments, that fraction of a second, is the eternity. Photography gives me the ability to capture and preserve the eternity of that moment so other people can experience it.

How do you choose the moment?

In documentary it’s the ability to reacting fast. When I get to a location I will scout for interesting characters. In nature I go to great lengths planning the time of year, the day, weather, the moon. All these things work together so I can get that moment. One of thing I have started doing recently is to shoot these massive panoramas because I could not capture the eternity of the moment in front of me with just one frame. My biggest panorama has 113 frames and the view is 180 degrees side to side and 180 degrees top to bottom. You can capture an entire place in one big panorama.

You have recently concentrated your work in Cuba, Guatemala and Mexico. What inspires you about those places?


Being Latin is the first thing. I grew up in that culture and I’m drawn to it. I lived for five years in Mexico, so I’m very familiar with the culture. In the case of Cuba, it’s fascinating to go back to the land where I was born, be with my people and see what they’re going through, detached from all the toxic information you get in Miami. If you grow up in Miami with Cuban parents, Cuba is hell. But Cuba is not hell! I have been to war zones, like Sudan, so I know what hell is, and Cuba is not anywhere near being hell.

In the case of Guatemala, it’s my fascination with the celebration of The Day of the Dead, during the Easter Holy Week in Antigua, which is a very heart-felt celebration and the second biggest in the world after Seville, in Spain. I have been shooting a story there called The Brotherhood of Time for the nearly a decade.